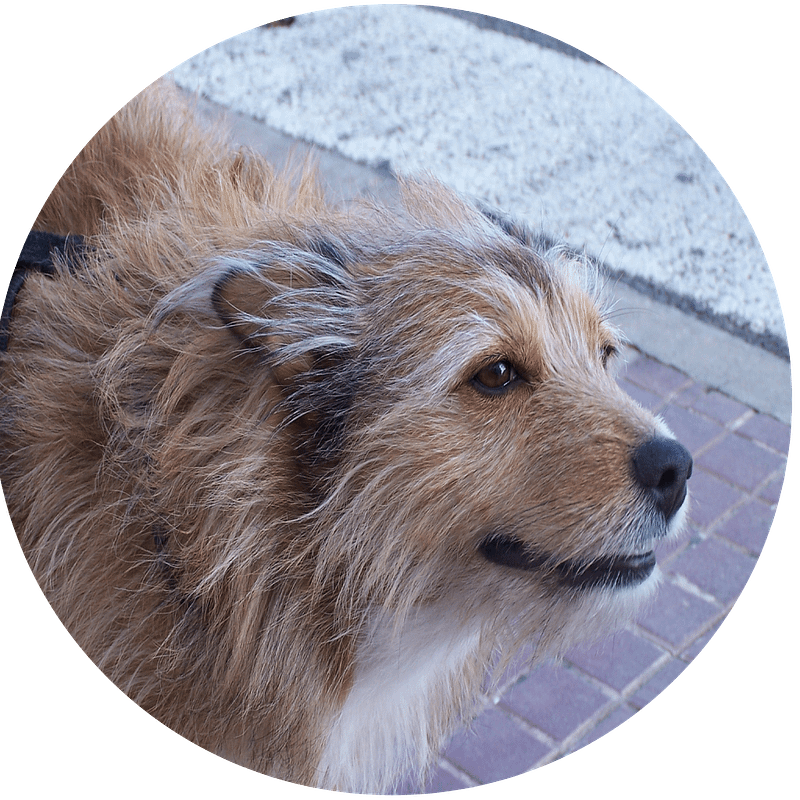 Whatever is on the aft deck is still there. I’m determined to have a look, so I jump off the settee and walk over to the companionway steps. It’s more of a dance really, step forward, get flung to the right into the port settee, then immediately left into the mainmast. Eventually, I make it to the steps.

Ann says “Mitzie, no, I told you can’t go up into the cockpit; it’s too dangerous. I take no notice and keep staring up the steps”.

Ann shouts, “Mike, I think Mitzie needs to go for a pee”.

Mike calls down “Now, really, now? It’s not the best time in the world”.

“OK, OK, I’ll try, put her harness on and her life jacket and I’ll clip on myself and take her aft on the sheltered side”.

Ann takes ages putting all the gear on me. I can’t move and struggle to heave myself up into the cockpit. Ann helps and shoves me up. Mike clips me on and starts to climb out of the cockpit. He turns around and says, “If we fall overboard, you know what to do, Ann, don’t you”?

I think, oh no, not the thing to say now.

I can see Ann is thinking about this. She goes more ashen in the face. I’m sure I can see steam coming out of her ears, she screams, “Know what to do? I don’t know what to do. If you fall overboard then you know as I do that is it. You’ll never get back on board in this sea”.

I think, what about me, who will get me back on board?

Mike is tugging at the lead I hate that! I jump up onto the coaming and look around.

The sea is wild.

Huge green waves, frothing white, rolling into the distance, the wind is deafening, howling like banshees, tugging at you.

It feels like the wind wants to push me onto those rolling waves.

I look behind me and see Mike struggling to stay on his feet. He is gripping the guardrails with his left hand, his knuckle white as a sheet. Every time the boat rolls to port, it feels like only gravity was keeping us glued to the deck. The green waters of the Bay of Biscay swishes past us as the wave roll under the keel. As soon as it passes, the boat lurches upright again with such a force that it throws me against the coachroof, gluing me to it and then swish, the next wave arrives.

In the middle of the back deck is the generator, it is screwed through the steel walkway on rubber pads with bolts. It has a burgundy cover with sides almost to the deck. Next to it, three clear plastic water containers sit strapped in with a blue rope. I slowly lift the cover with my nose, there they are, two pigeons bold as brass, sitting huddled together.

I push my nose back between the frame and give my loudest shout.

I say, “Two pigeons”, but Mike doesn’t seem to hear me.

Mike, kneels down, squeezes in with me and lifts the cover a little.

“Two pigeons, how and when did they come aboard”?

“I told you there are two pigeons”.

Mike says, “Leave them, Mitzie, they are too tired to fly in this storm, leave them and go garden if you have to”.

I turn around and head back to the cockpit and jump onto the coaming then immediately onto the starboard seat. Mike follows me in and says to Ann, “There are two pigeons hitching a ride on the back deck. They are sitting under the generator cover, huddled together. They must have been happy to land on Ruffles Spray. They would have drowned, poor things. Mitzie didn’t go garden all she was interested in those pigeons”.

I think, go garden? Yea, right, how do they think I can go garden in this roller coaster ride? The skipper is losing it

Mike and Rowan are speaking to each other on the VHS radio. Grampus is about three hundred meters to our starboard and about the same distance ahead.

“Well, Mike, every time you go into the trough of a wave, all I can see is the top half of the mainmast. The rest of the boat can’t be seen. The waves must be about four meters high, add the swell to that, and it doesn’t add up to anything good. Let’s hope it doesn’t get any worse, over”.

Mike says, “Same with Grampus, you keep disappearing in the troughs. What is the wind speed, over”?

Mike says, “Thirty knots, you are kidding me, it feels more like forty gusting fifty, you telling me the truth Rowan”?

“OK, you are right, Mike, it is blowing forty-two knots, gusting fifty. Any increase in wind speed or gusts and we will be in trouble. We have five and a half hours to go, let’s hope it decreases soon”.

Purchase on Amazon or read for FREE on Kindle Unlimited

Purchase on Amazon
or
Read for FREE with Kindle Unlimited

We use cookies on our website to give you the most relevant experience by remembering your preferences and repeat visits. By clicking “Accept All”, you consent to the use of ALL the cookies. However, you may visit "Cookie Settings" to provide a controlled consent.
Cookie SettingsAccept All
Manage consent

This website uses cookies to improve your experience while you navigate through the website. Out of these, the cookies that are categorized as necessary are stored on your browser as they are essential for the working of basic functionalities of the website. We also use third-party cookies that help us analyze and understand how you use this website. These cookies will be stored in your browser only with your consent. You also have the option to opt-out of these cookies. But opting out of some of these cookies may affect your browsing experience.
Necessary Always Enabled
Necessary cookies are absolutely essential for the website to function properly. These cookies ensure basic functionalities and security features of the website, anonymously.
Functional
Functional cookies help to perform certain functionalities like sharing the content of the website on social media platforms, collect feedbacks, and other third-party features.
Performance
Performance cookies are used to understand and analyze the key performance indexes of the website which helps in delivering a better user experience for the visitors.
Analytics
Analytical cookies are used to understand how visitors interact with the website. These cookies help provide information on metrics the number of visitors, bounce rate, traffic source, etc.
Advertisement
Advertisement cookies are used to provide visitors with relevant ads and marketing campaigns. These cookies track visitors across websites and collect information to provide customized ads.
Others
Other uncategorized cookies are those that are being analyzed and have not been classified into a category as yet.
SAVE & ACCEPT